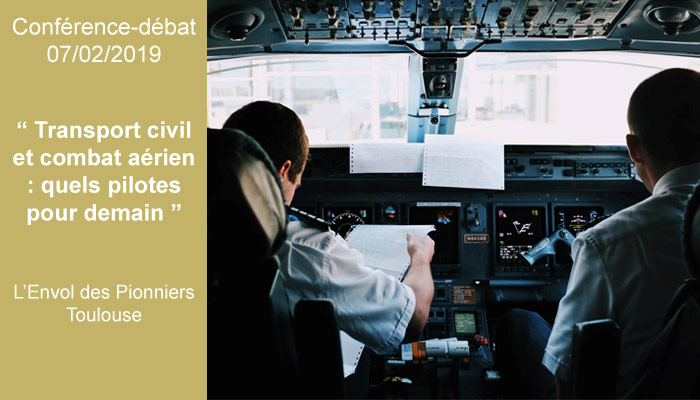 Through the organization of conferences on high-profile topics, the Excellence Club Aerospace brings together experts from the aeronautics and space industries in prestigious venues and helps form fruitful relationships between industry players.
The evolution of the pilot’s profession: a problem full of challenges for air transport, which will be the subject of the conference-debate on February 7

Are you a pilot, an aspiring pilot, an instructor, an aviation industry professional or simply an aviation enthusiast? The Excellence Club Aerospace invites you to participate in a high-flying conference-debate held in a place steeped in history.

Experts with civilian and military backgrounds will meet to discuss and debate the issues that concern all players in the aviation industry: how will the role and environment of technical aircrew evolve in the coming years? What are the impacts on our society? How do aircraft manufacturers envisage the cockpits of tomorrow? How to train the future generation of pilots? What is expected of today’s pilot?

Answers to these many questions on February 7 at the Envol des Pionners in Toulouse, in the presence of an exceptional panel of speakers:

The presentations will be punctuated by time for exchanges and networking, during which participants and speakers will be able to discuss over a cocktail reception.

During this event open to the international public, presentations will be in English

A conference held in a place full of aeronautical history

This conference-debate will take place at the Envol des Pionniers, an exhibition space of more than 1000m² integrated within La Piste des Géants. It is a place full of history which rests on the old airfield of Montaudran from where the pioneers of the airmail took off to accomplish sometimes perilous missions. The inauguration of La Piste des Géants took place on Thursday, December 20, just 100 years after the first flight from Montaudran airfield to Barcelona.

Discover the articles of our previous meetings on AeorMorning.com :

“Doing business with India” in partnership with the Toulouse Business School

“The benefits of Cloud solutions for the aerospace industry” at the Château de Caumont
Practical information :