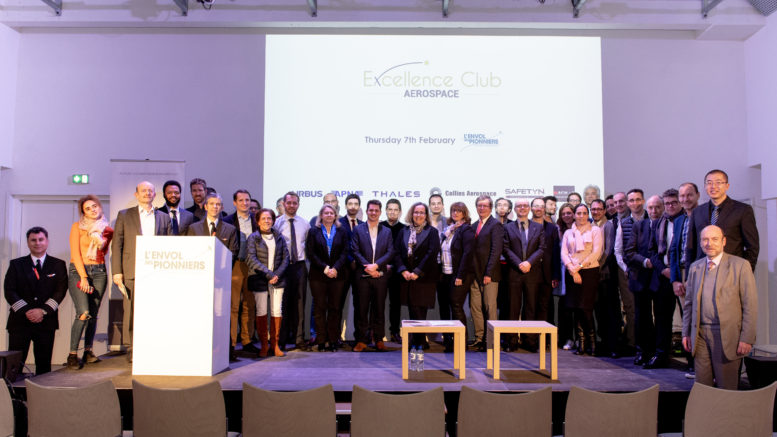 On Thursday, February 7, the Excellence Club Aerospace brought together industry professionals and aeronautics enthusiasts at the Envol des Pionniers in Toulouse for its sixth meeting. By tackling the theme of the pilot of tomorrow, the organizers wanted to bring together key players in the sector to discuss a subject that is full of challenges for air transport. All of this in a mythical location steeped in history.
When recognized players in the aviation industry share their vision of the future of pilot training

Participants were able to appreciate the contributions of a panel of experts who came especially from Paris, Toulouse and the United Kingdom to shed light on the subject through their experience and the research of their companies. Airbus, Thales, Collins Aerospace, the Association des Professionnels Navigants de l’Aviation [APNA], the Centre National de Recherche Scientifique [CNRS] and Mach3 Management presented the major changes in the pilot’s profession.

Jean-Michel Bigarré, Director of Pilot Training at Airbus, began the presentations by describing how the aircraft manufacturer is preparing to meet the phenomenal increase in the need for pilots that is coming. He reviewed the changes in the profession, from five-person cockpits to the future single-pilot cockpit, and emphasized the need for Airbus to train competent pilots.

Moreover, even if the pilot of tomorrow could be a simple systems supervisor, aircraft manufacturers will have to ensure a certain uniformity in the quality of training worldwide. This is a need that Airbus wants to meet by creating its own standard called the Airbus Flight Training Reference. The criteria of the Airbus Flight Training Reference have been adopted by the first Airbus Flight Academy opened in Mexico last year, and Jean-Michel Bigarré has announced that another Airbus-certified school will open in Angoulême in March.

To meet the need for pilots mentioned by Jean-Michel Bigarré, there is no shortage of professional flight schools. Few of them really meet the requirements of the Flight Crew License (FCL) regulations. This is the alarming observation made by the Association des Professionnels Navigants de l’Aérien, represented by its president Geoffroy Bouvet. According to him, too many training courses are not adapted to the requirements of airlines and push students to go into debt before they are ill-prepared for the selection process.

To remedy this, the entire pilot training process should be reviewed, from selection to release. Psychotechnical, psychomotor and human criteria required by the companies should be integrated in order to prepare candidates for a career as an airline pilot where non-technical skills are most valued. The use by flight schools of tools used by airlines such as REX – Pilot Experience Feedback – or CIRP – Critical Incident Response Program – should largely contribute to this. P

Training today’s pilots is not only about how tomorrow’s cockpits are designed, but also about adapting to the new generation of students. Serge Gourlaouen, a researcher at the CNRS and president of the Air Paris Training Academy, has come to support this thesis. According to him, the training methods of future pilots will have to be adapted to a generation of apprentices raised on tablets and smartphones.

Serge Gourlaouen has recently taken over the management of Paris Air Training Academy, a professional flight school based in Tours ©Studio-Folies
What will the cockpits of the next generation of aircraft look like?

Following the first three presentations, the evening moved on to a second highlight, devoted to more technical subjects. Didier Poisson, test pilot and head of certifications at Thales, presented the latest innovations of his company in terms of augmented reality and synthetic vision for cockpits. These cutting-edge technologies are used or will be used on Airbus aircraft, and will help improve the way pilots manage their aircraft’s trajectory.

According to the test pilot, there are two opposing philosophies regarding the role of pilots in increasingly automated cockpits: some believe that the pilot’s role should be gradually eliminated, while others believe it is imperative to keep him or her in the control loop by simplifying the task. Didier Poisson belongs to the latter school of thought, which he defends by being involved in the development of tools designed to keep the pilot in control of his aircraft in all flight situations: the Ehanced Flight Vision System and the Synthetic Vision System or the Head Worn Display (a head-up display that projects information onto a bezel that the pilot has on his head).

Still in a technical register, Laurent Audounet came to share the vision of Collins Aerospace as for the potential of the data transmission to improve the piloting of planes. The subsidiary of the UTC group is indeed at the origin of many innovations which go in this direction, like FOMAX. Also known as Flight Operations and MAintenance EXchanger, this technology is dedicated to the improvement of the performances of the airline companies by the acquisition and the massive sending of data.

By processing this data and making it directly accessible to pilots, airlines will be able to improve their operational performance: anticipation of maintenance operations, optimization of trajectories, improvement of cockpit displays, etc.

Pierre-Henri Chuet came to represent the military component of the conference-debate with a very colorful presentation. The former Aéronavale pilot wanted to demonstrate the technological gap that exists between the cockpit of a third-generation fighter and the Rafale, a fourth-generation fighter. With the latter, four types of aircraft have been replaced and its pilot has become responsible for a multitude of missions that were previously reserved for several fighters: air-to-air, air-to-surface, nuclear attack, etc.

With modern aircraft whose piloting has been simplified, the mission of the modern fighter pilot is now that of a manager of a complex weapon system. However, landing on an aircraft carrier is never a foregone conclusion, as Pierre-Henri Chuet reminded us when he said that he once had to go over it nine times before landing on a ship. The automatisms were of no help …

To accompany the presentations, participants were able to take advantage of a cocktail reception to continue the conversations and meet the speakers. Many meetings were made possible by these convivial moments dedicated to networking.

According to those present, this conference-debate was an opportunity to gain insight into the possible evolution of the pilot’s profession: the themes of training, cockpits and fighter aircraft were thus addressed to offer a complete overview of the different facets of the profession. Professionals and simple aeronautics enthusiasts were able to listen carefully to the opinions of leading specialists on a key topic in air transport.

Founded in Toulouse in April 2018, the Excellence Club Aerospace is the business club of the online aeronautical journal AeroMorning. With a resolutely international dimension, its founder wishes to enable the creation of fruitful meetings between industry players during convivial events. Several times a year, round tables and conference-debates bring together the best experts in the aerospace industry to discuss topics related to innovation, news and aeronautical excellence.