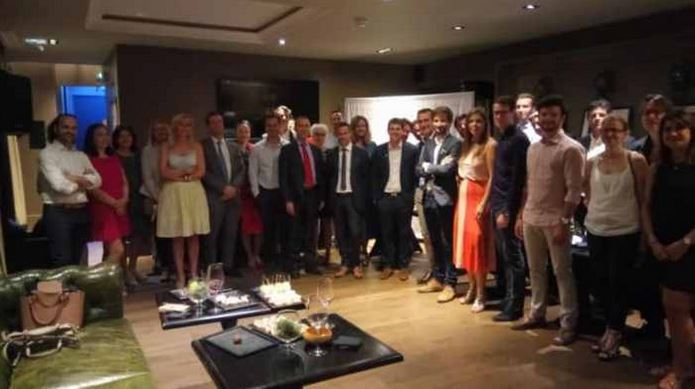 The Business Club launched by AeroMorning held its first conference-debate during a reception at the Hotel La Cour des Consuls in Toulouse on Thursday, July 12th. The participants came to attend round tables led by quality speakers, such as Scalian and Telespazio. By choosing the theme of digitalization and artificial intelligence for this first event, the organizers of the Excellence Club Aerospace have demonstrated their ability to unite players in the aerospace industry around a subject that is so important to the future of the sector.

A meeting of experts held in a charming location

Ideally located in the heart of a historic district of the Pink City, the hotel La Cour des Consuls became for one evening the meeting place for the aerospace industry actors willing to discover how to benefit from the digital transformation. Among the attendees, company directors, executives and aeronautical engineers were eager to exchange and deepen their knowledge on a subject whose true foundations are often unknown.

The Scalian group, represented by its data-scale director Stéphane De Varenne and its data-intelligence technical manager Nicolas Marchand, launched the ball of exchanges by proposing a presentation on the realities of the functioning of artificial intelligence and deep learning. By choosing an accessible and pictorial speech, the company’s representatives were able to capture the interest of their audience and spark a number of conversations.

Paced by a cocktail reception, the evening continued with a speech by Henri De Foucauld, Telespazio’s strategy and defense director. He gave a speech that was directly in line with Scalian’s presentation, describing the example of an essential digital transformation carried out within his company.

The conference ended with the words of a guest recognized in the aeronautical research community. Ariel Sirat gave a brief presentation on the activity and functioning of the Institut de Recherche Technologique St-Exupéry, which he has directed since its creation in 2013. This concluded the evening with an example of an entity that works through research to promote the digital transformation of the aerospace industry.

As our aerospace industry enters the era of digitalization, many professionals would like to know the mechanisms behind this often borrowed term. The conference organized by the Club was therefore an opportunity to “demystify” the subject and to discover, for example, the meaning and functioning of deep learning.

Jean-Christophe Bianic, chief data scientist at Scalian, set out to shed light on the foundations of this component of digital transformation in a very accessible way. By insisting on the origins of artificial intelligence, which go back to Alan Turing’s research in the 1940s, he provided essential information for a good interpretation of the subject.

It is essential to understand that the way to process digital data retrieved by sensors is one of the main challenges of digital transformation. The principle of deep learning lies in the ability of a set of machine learning methods to interpret data retrieved individually by sensors in order to assemble them to form the frameworks of a general solution. The example of image-based object recognition software is a good illustration of this, as it is used to identify sometimes complex types of objects through the simple collection of fragmented visual elements.

The Excellence Club Aerospace: a meeting place for business

With an international vocation, the Club was created to meet the expectations of many players in the aerospace sector who wish to take advantage of a means of developing their network in a high-end setting conducive to exchanges.

Throughout the year, round tables and conferences are organized to enable members to enrich their knowledge on topics related to research and innovation. Concrete solutions are presented by experts in the aeronautics industry and contribute to improving the performance of companies. Aeronautical excellence takes on its full meaning.

Access to the events is possible for holders of the Excellence Club Aerospace card, which can now be obtained through a paid membership. Visit the Club’s website to learn more and discover the calendar of upcoming events: www.excellence-club-aerospace.com.